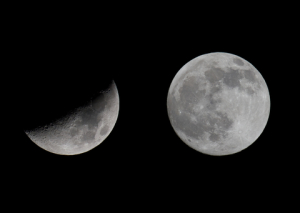 – Slogan from the 2010 It Gets Better Project founded to give hope to LGBTQ youth and quoted in a pregnancy loss group.   The group member stated that the words also summed up her experience of how her life had changed in the year after she had experienced multiple pregnancy losses.

I received a postcard from myself this week.  It was sent from Burning Man, the yearly event in the Nevada desert devoted to art and self-expression, and was part of someone’s art/gift.  The idea was to invite people to write postcards to themselves from the festival so that they could capture their thoughts from the experience and ponder them at a later time.

The man who was leading the project said that he would send my card at a random date, which ended up being a little less than 4 months later.  Given that I had initiated this piece of correspondence and had done so in the fairly recent past, there wasn’t much about the card that surprised me. The only thing that gave me pause was my closing signature- “Love, D”- which seemed both kind of sweet and wholly unnecessary in a letter to one’s self.

Receiving the note, though, especially at the end of the year, led me to think about time and how, through effort and circumstance, we change and experience different versions of ourselves.  It also reminded me of how different my grief has felt through the years, and how I have heard this experience described by others.

As you may be keenly aware of at this point, the loss of someone to whom you are attached is not all felt in one brief episode of your life.  Although the most intense pain is usually experienced early on, the vibrations of the loss will likely be evident in various ways and intensity through the years.  There is a part of our love and loss that is put in our life for keeps.  However, the way we think and feel about it is likely to change quite a bit.

Losing a baby often sets a line of before and after in our personal story.  We change to a “new normal” and then we change again.  How the loss of our baby hits us emotionally and what it means to the arc of our lives may be drastically different 1 month, 1 year or 10+ years later.  Major loss is a crisis that shakes and breaks a certain story we have in our minds of what is supposed to happen.  The version of who we were and where we thought we were going is altered.

When I reflect on my own pregnancies and losses, I can recall very different versions of how I saw the world and my place in it.  There was a time when I looked at my future with the expectation that I would be raising a daughter.  There was another time when I thought I might never be happy again.  I was remarkably wrong on both counts.

Clients have told me of similar experiences in their lives.  One woman spoke to me about how she viewed a pregnancy loss that had happened years before.   Initially, she felt that the loss had hurt her in a way that would never be viewed as anything other than tragic.   Years later, rather than be entirely painful, she noted that the memories of that time had taken on a gentler, rather sweet quality in a richer life history.  In particular, she recalled the internal transition of seeing herself as a mother and expressed appreciation for understanding that she had that part of her inside.  Although the memories of it were still sad, she viewed the pregnancy as an important and tender experience.

The passing of time and introduction of new circumstances tends to soften some of the pain of loss.  It may also lead you to see how your values, priorities or sense of purpose were affected.  You may have decided to focus more or less on having a family or on an entirely different area of your life.  You may have found that you have more empathy for others suffering loss.  My guess is that you have learned more about yourself and pain than you ever cared to, and that some of that information might have turned out to be useful.

This isn’t a fancy way of saying that time heals all wounds. Rather, it’s that we change with time and interact differently with our grief.  The loss is not gone, or made insignificant, but we don’t stay at a fixed point.  We have had a wider set of experiences, including time spent learning to tolerate the loss.  If nothing else, as time goes on you may have more empathy for your former self who went through so much.  You might also feel humble when contemplating the twists and turns of life that your future self will encounter.

For my part, for this moment, I’m going to take a cue from my Burning Man self of last August and try to take a warm and welcoming stance toward my future self.  I wish her well and hope she gets a lot of great postcards.

Wherever you are in your grief journey, I wish you a big breath of peace today.