“Anyone who has lost something they thought was theirs forever finally comes to realise that nothing really belongs to them.” Paulo Coelho 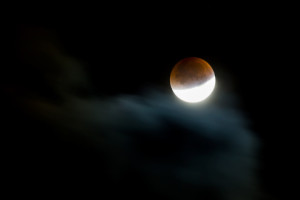 A couple of weeks ago there was a lunar eclipse that coincided with a super moon.  On the Pacific coast the show in the sky happened at a reasonable hour, and the hillside park near my house was packed with people eager to witness it. Sitting with my partner and our two agitated dogs (apparently people in the Bay Area like to howl at full moon events), I realized that I had missed a call from my mother.

Later, during a quieter moment, I was able to hear her voicemail message to me.  My mother sounded happy, with a bit of an excited edge.   She said that she, my father and uncle were all in  the car and pulled over so that they could watch the moon above a field.  The three of them live in the same in the midwestern town and are all in their late 70’s.   At a time when my parents and uncle are all usually settled in and watching the late news on TV, they were instead out admiring the way the world (and sun and moon) turns.

My mother cheerfully commented in her message that either this would be their last chance to see a super moon lunar eclipse or that they would be viewing it from the other side (looking down from heaven) when it occurs again in 2033.  The darkened ball in the sky in front of me was slowly shifting and growing a bigger Cheshire cat grin. I felt sad about the idea of my family members being gone someday and happy that they had piled in the car to go celebrate something rare and ephemeral.

The idea that we are all transients who will be moving on can be unnerving.  It’s hard for me to hold on an ongoing basis the idea that none of us know when we will be finished living, that we don’t know whether we are one of the longer or shorter chapters in the big story, and that we probably will not get much of a say in the matter.

When we have lost a baby, we may feel especially keenly that life is not all about fairness and that our time on the planet is of uncertain length.  Many of us have lived through traumatic events and traumatic loss.  Many of us live with chronic aches of missing our baby.  This makes it all the more notable to me that, either despite these experiences or in part due to them, I’ve met so many people who, after loss, are able to dig in and make the most of their slice of impermanence.

Some people clearly draw a connecting line between what they have learned about sudden loss and not taking anything for granted.  Sometimes I think we tend to be so broken after loss that the world we end up putting together has a freshness where more details are noticed.  Whatever the cause, I think anyone who is able to see and appreciate the little things in his or her life is lucky.  Those who can notice beauty, appreciate kindness and find meaning in an activity or conversation are getting hits of good feelings on a regular basis.

The turns, unfortunately, are not orderly or fair, and the pain of our turn may be overwhelming. That’s when we might feel the most grateful for the fact that it will be changing.  We’re all somewhere in this moment and will be somewhere else pretty soon.  And wherever we are, there is something in front of us that we might want to notice before it’s gone.