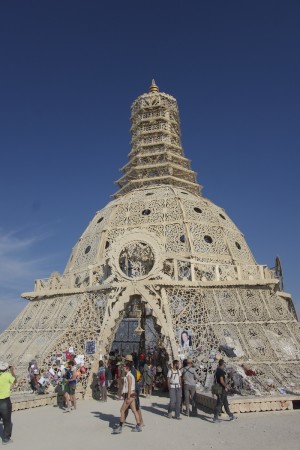 “Love is a Temple
Love a Higher Law” U2, One

“I don’t even know what I would have wanted someone to say.  Not:  It will be better.  Not:  You don’t think you’ll live through this, but you will.  Maybe:  Tomorrow you will spontaneously combust.  Tomorrow, finally, your misery will turn to wax and heat and you will burn and melt till nothing is left in your chair but a greasy, childless smudge.  That might have comforted me.”  Elizabeth McCracken, An Exact Replica of a Figment of My Imagination

I went through one of those trap door rabbit holes in cyber space the other day and ended up reading about the Temple at Burning Man.  Burning Man, of course, is the yearly art festival in the Nevada desert that is famous for a number of things, including the practice of setting fire to many of the art pieces.  My only experience at Burning Man was in 2014.  There were a million bits of wonder and feeling that came up for me in my time there.  It’s quite an event.  Look at pictures from any year and you’ll get an idea of what I’m talking about.

A participant may see a giant Golden Dragon with beautiful people on board partying at sunrise, flying zoetrope monkeys powered by drumming and a Barbie Death Camp.  In this gift economy, someone may offer to write the theme song for your life or make a sundae on your tongue.  You may get stuck in a sandstorm which leaves you stranded and disoriented and when it clears, a stranger may come along and offer you the best grilled cheese sandwich you’ve ever had–  it’s kind of like that.  And, because someone else is bound to tell you if I don’t, I should say that there are a fair amount of nude people.  Also, it’s hot, really hot.  Did I mention that it takes place in a desert?

Since 2000, one of the traditions at Burning Man has been the construction of a temple.  Various architects, the most well-known being David Best, have designed a different wooden creation every year.  Like may things at Burning Man, it is done on a grand scale.  The physical construction begins off site months before the event and continues on site in the weeks leading up to the festival.  Built to last only a brief time in an intense environment, every year the temple seems to be an extremely well thought out, intricate and gorgeous structure.

During the festival, the Temple is a gathering place of memory and reflection.  People bring pictures, personal belongings, and letters.  Pens and markers are available for writing on the wood.  It gets filled up with the space between the living and the dead.  It is a place of feeling and remembrance and is often packed with people walking, sitting, and lying down inside the walls.  During the week of the festival, it feels like an inviolate and solemn place.  And on the last night of the event, it burns.

Like other burns, it is done at a specific time, after it is emptied out and sealed up, with tens of thousands watching from a safe distance, feeling whatever they are going to feel.  People talk about it as a release, a spiritual catharsis.  It’s whatever you need it to be.

The McCracken quote above is from a book written about her experience of having a stillborn son.  This passage made me think about Burning Man and the Temple.  At first I wondered what about being told that you will be melted down could be comforting.  After baby loss, isn’t a person already so hurt and distressed that losing more of themselves is what they fear most?

But after considering McCracken’s words, I wonder if she is saying simply that it would take a dramatic, destroying image to resonate with what she felt inside.  Maybe she was responding to the knowledge that her pain wasn’t a brief illness that she would temporarily dip in and out of, but rather a loss that would take much more of her than that.  Maybe only a gutted, burnt out metaphor was a match for what she felt and the place she would be coming from to face whatever was next.  Maybe what she could identify with most was the idea of burning through every feeling and being taken down to almost nothing.

I wouldn’t confuse this with hopelessness.  A forest cleared by fire will have a next stage of growth.  A person who hurts to his or her core will still eventually let in new bits of life.  And every year a desolate playa in Nevada turns into a giant, vibrant city.

The time I went to Burning Man, the temple was filled with pictures, handwritten letters, pieces of cloth, at least one pine cone and some stuffed animals.  Robin Williams had just died, and there were several areas with his picture and notes to and about him. There were goodbyes written on the walls to every kind of loved one.  There were memorials to pets.  There were pictures of moms, dads, grandparents and the kind of friends that are family.

There were small items meant for newborns.  There were photographs of and names of babies, notes to and about the ones who didn’t make it into this world as well as infants who were no longer living.

On the last night, I pedaled to the temple burn at sunset along with others on foot or on bike–past the ashes from another burn, then a metal octopus, a miniature log cabin on wheels, a big group of people in sailor suits, a line of giant teapots strung together and some people sitting inside a neon star.

When I saw the temple burn, the first change I noticed was a soft orange glow inside, then flames outside.  The smoke moved softly and adamantly in one direction.  The moon looked tiny.  Everything seemed to slow while a small corner of the desert burned down into something else.