The ability to be in the present moment is a major component of mental wellness. – Abraham Maslow 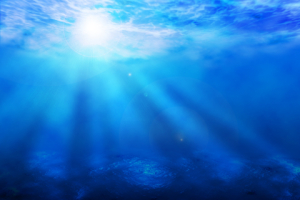 I recently spent some time reading aloud to a family member who wasn’t feeling well.  Our selection was Unbroken by Laura Hillenbrand, the true story of an Olympic runner who was in World War II. It’s not the kind of book I usually go for, but I plan to finish it as I’m finding it to be not just a page turner, but pretty darn inspiring.

The part we just finished (spoiler alert) involves the main character, Louie Zamperini, floating in a life raft after his B-24 bomber has crashed with the loss of eight men aboard.  He is one of the three crew members who have survived together on two life rafts.  After being adrift for 27 days, with the men in the throes of both intense starvation and dehydration, a plane appears overhead.  Unfortunately, it’s a Japanese aircraft,  which starts firing at them.  Louie jumps overboard to avoid being shot and the life raft begins to be riddled with bullets.

The area of the ocean where this takes place is infested with sharks, and as Louie enters it, he suddenly becomes the intended object of the next meal.  Weak and underwater, Louie is approached by attacking, open mouthed sharks which he fights off using the information he learned in a survival class (basically to widen his eyes, bare his teeth and bop the sharks on the snout with an open palm).

He goes back and forth between shark bopping and climbing back onto the raft in between the six passes of the plane and six episodes of shooting (plus a dropped bomb that did not explode).   When he climbs back aboard the raft for the last time he finds his two crew mates miraculously unscathed by the shooting.  The three of them manage to save one raft and patch the 48 bullet holes in it while taking turns pumping out water and clubbing the sharks that are now jumping out of the water to get at them.  Altogether a pretty intense series of images…

The story stirred up a lot of thoughts for me, and is currently serving as a marker of what a really bad day can look like.  It made me think, too, about how so many dramatic episodes in life seem to be a mixture of lucky and unlucky events.  Another take on the story could be that it’s a compelling message about not giving up in the middle of a crisis.  And it has definitely crossed my mind that I may want to invest in a survival class.

Louie had a bunch of things on his mind that day in the ocean and he was full of action, but he wasn’t really multi tasking.  When he was smacking sharks, he was smacking sharks.  Not dealing with starvation, dehydration, avoiding bullets, fixing the boat or trying to float to land.  He wasn’t even breathing.

If Maslow was right about the ability to live in the present moment being a component of mental wellness, and if all of those writers, meditators and therapists preaching mindfulness are also on to something, then our moment, our now, seems a bit more sacred.   What we are doing right now is what we need to be doing fully.  And all the moments coming will benefit from engagement with the one we’re having with now.

More aspirational than realistic as a way to be all the time?  Heck, yeah.  And what’s wrong with that?

I was pretty anxious during my last pregnancy, which occured after my two losses.  But I remember a point where I really started to appreciate that there were very few things in the pregnancy that were under my control.  I could try to eat well, take my vitamins, go to my doctor appointments and generally try to live a safe and pleasant life.   And that very short and humble list was the total extent of my control over the experience.

And sometimes, not all of the time, I felt the freedom of that humble list.  I could eat and think about eating (way too many bagels for some reason), take my vitamins and so on and those actions had meaning and purpose.  The rest of the time I could try to take up my now, whether that moment was about acknowledging and living with a moment of fear (which always passes eventually) or enjoying a moment of peace or hope.  Just like in meditation or any type of mindfulness, I didn’t stay in this place.  My mind would race away and I would have to circle back, but it helped.  It helped a lot.

In times of uncertainty, (which, realistically, is always) this is the only moment we have.  If we’re in a tough spot, breaking it down is likely to help us get through it.  If we’re in a great spot, it’s probably worth taking in.  Yes, we’re going to sleep through and space out through much of our lives.  But it just might help to notice that we can also jump in and roll around in a given moment.  Your right now experience may feel like a challenge, a gift, or pretty inconsequential, but by noticing it, you might live it a little more deeply.