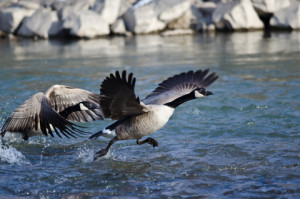 “The Guide says there is an art to flying,” said Ford, “or rather a knack. The knack lies in learning how to throw yourself at the ground and miss.”
Douglas Adams, Life, the Universe and Everything

“I’m learning to fly, but I ain’t got wings.  Coming down is the hardest thing.”  Tom Petty Learning to Fly

The pilot in my life has tried, repeatedly and unsuccessfully, to teach me the physics of flying.  So far there is only one fact that has really stayed with me.  It’s this:  after we have put fuel in the plane, ensured all the parts are working, buckled in, started the propeller, communicated with the tower, moved the throttle, flicked lots of switches and gone skittering down the runway in that wonderful, jerky fashion of small planes, after all of the steps and effort are made by the pilot to leave the solid surface of the earth, it is the air flowing over the wings that pulls the plane off the ground.

This piece of knowledge is remarkably unhelpful in moving me toward my goal of being able to land the airplane in an emergency, but it does help me make sense of some other things.  It’s a great reminder to me of how our piece of an endeavor may be big, complicated and important but, ultimately, not the whole thing.

Sometimes when the pilot and I intend to go flying we are stopped by clouds, wind or VIP events declaring jurisdiction over the air we wanted to travel through.  Once, we got in the plane, did all the steps to run up and were sitting on the runway when it became clear that an instrument wasn’t working properly.  Uncertain of the cause, we had to scrap the flight.  The last time we planned a weekend trip, changing weather forced us to decide against three successive destinations and we ended up driving to a nearby town instead.  Being a small aircraft pilot is both powerful and humbling– you get to do big things much of the time but are also always at the mercy of greater forces.

As a clinical psychologist, I feel that I have an honorable and important job.  I spent many years learning about human behavior and theories of how to help people.  Psychotherapists are given trust, privilege, and responsibility as we sit with people and look into their lives with them.  We are capable of having a great deal of influence over others and the results can be life-changing.  But the impact of our work is still limited by multiple factors.  Timing, skill, communication, chemistry, intention and motivation and other issues between a client and therapist might affect how things progress in a given moment or session.  For better or for worse, the result can never be entirely in our hands.

After baby loss, people are always trying to do something.  It’s usually a big thing, even if it doesn’t appear that way to others.  Sometimes it’s a bunch of big things.  It may be letting themselves feel more pain than they have ever felt before.  It may be trying to find a way to get through much of the day without crying so that they can return to work and keep their job.  It may be walking into an AA meeting for the first time, because the way they have been trying to cope isn’t working.  It may be sitting with that weighty decision of whether or not to try for another baby.  And whatever they are trying for may or may not take off.  Chance, effort, ability, help from others, and grace may all factor into the final result.

Living after baby loss, like living the rest of life, is about trying for the things that matter to us.  It just tends to be a hell of a lot harder than most of the other chapters we’ve lived.  We don’t know if we’ll get what we’re trying for, we just get to do the part that is ours to do.  We can only try to be there in the right position, moving at the right speed and holding on tight.