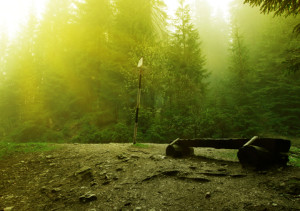 And it’s too early in the morning

And too late in my life

To write a different story

To hope for different lines…

“Acceptance of one’s life has nothing to do with resignation; it does not mean running away from the struggle.  On the contrary, it means accepting it as it comes, with all the handicaps of heredity, of suffering, of psychological complexes and injustice.”     Paul Tournier

I visited the New York City 9/11 memorial and museum a few weeks ago.  It was the first time I’ve visited a memorial to events that were clear in my memory, albeit experienced from across the country.  The pictures I saw there were jarring reminders of what so many of us saw on TV back in September, 2001– the planes crashing, the survivors running away from burning buildings, the family and friends frantically searching for news of their loved ones.

One exhibit featured photographs of people who were standing on the street that day in Manhattan watching the events as they unfolded at the World Trade Center.  They were in the middle of watching the world go off the rails and it showed in big eyes, crumpled faces, hand-covered mouths.  It made me marvel again at how anyone ever goes from such a moment, of seeing the unthinkable, feeling the unbearable, to having a good life.

There are some lines in life that we cross and from which we can’t backtrack. Those people on the street that day in NY can’t unsee what they saw on that sunny morning and I don’t know what their lives are like today.  I imagine that they range from struggling to doing quite well.  I think about how they did it– how they made room for so much.  I think about how others I have known have gone through so much and kept living and growing.  How did they ever start on that road?

The word that keeps coming to my mind is acceptance.  Acceptance in the sense of that simple and challenging task of allowing into your reality that this is actually where you are and what is happening.

I have met many people who have faced losses that they thought would take them down permanently.  People who were sure that the unimaginable big awful that had invaded their lives was not a thing they could make peace with, and certainly not something they could do something with.  That overwhelming pain in front of us can look like a bed of nails.  We are certain that only a cushion–  substances, denial, work, distraction, sleep, something, anything– can make it bearable.  We feel a need to steer away from the pain, feeling that meeting it head on will bring disaster.

What I would call acceptance, or being emotionally open to the reality that we wish was so different, doesn’t seem wise at first.  Who wants to get an up close look at all that pain?  But it is the one way to know what we feel and that we can live with it.  If we don’t want to play a lifelong game of whack-a-mole, where our suffering keeps popping up in different areas, I believe that the answer is to live our reality and know the part of us that feels broken.  Feeling it, and processing it through time and with support, moves us to feel something more than our hurt and more of what life has to offer.

In his book, The Gift of Grief, Matthew Gerwitz makes a case for what he calls “Surrendering but Not Giving In”:

“…the counterintuitive stance of openness, vulnerability, and engagement with our pain is actually the source of genuine healing–the approach that takes us beyond survival and back to living.”

Whether called acceptance or surrendering,  this is something that can be practiced.  We’re still going to feel overwhelming feelings and need to take breaks from them.  Defenses serve a useful purpose at times.  But we can start to invite ourselves to be open to acknowledging the places that hurt.  We can practice noticing where we are right now, without  filling in the space between what we think we can stand and reality.

How might this apply to the experience of baby loss?  Here are a few thoughts pulled from working with those who are working on acceptance after perinatal loss.

Tangible reminders of the pregnancy or baby can be useful in taking in the experience of loss.  Many people naturally do this and some push themselves to do it in small doses.  Looking at pictures, clothing or baby toys puts us in touch with the fact that it all really happened.  Whatever the good parts of the pregnancy or time with baby and the terrible ending were, they were real.  It’s all part of our life and part of us.

Connections with others can support us and facilitate our acceptance of the loss.  This can mean connections with the baby, such as visiting the grave, looking at ultrasound pictures or speaking to your partner about your memories of being pregnant.  Sometimes people find invaluable support from others who have been through similar losses, which can happen either online or in person.  It can also mean connecting with other loved ones who reinforce both the reality of what you have been through and that you are still upright and alive.

Notice thoughts that are taking you too far away too often.  It’s normal to start thinking about trying again immediately after a loss.  It’s usually extremely compelling.  Other thoughts of the future might also have a magnetic pull on you right now.  It’s often useful to question how much you’re shifting attention away from the present.  What are you feeling about your life right now vs. what might lie ahead?

I think Tournier was on to something in his quote about acceptance as different from resignation.  It’s too late to change the lines of our story to date and that can be fiercely painful.  But it’s not a white flag of surrender or retreat to accept our life in all of its alarming reality.  Instead, I think it’s another way to practice compassion and respect for ourselves while continuing to heal and grow.